The Xilinx Kintex-7 FPGAs is known as one of the main product series which is built on a general architecture of 28nm. Furthermore, the design consumes the lowest power possible. In contrast with earlier FPGA generations, the power consumption of this family has a reduction of over 50%, while there is also an improvement in cost performance, about two 2 times.

Furthermore, the Xilinx Kintex-7 FPGAs can offer DSPs, logic of high density, memories, transceivers of high performance, and mixed flexible signals. Importantly, with these functions, you will be able to improve the performance of the system-level and also achieve tighter integration.

The xilinx Kintex-7 FPGAs has the following features

Maximize the Connectivity and Stay Within the Budget

Consumption of Half the Power 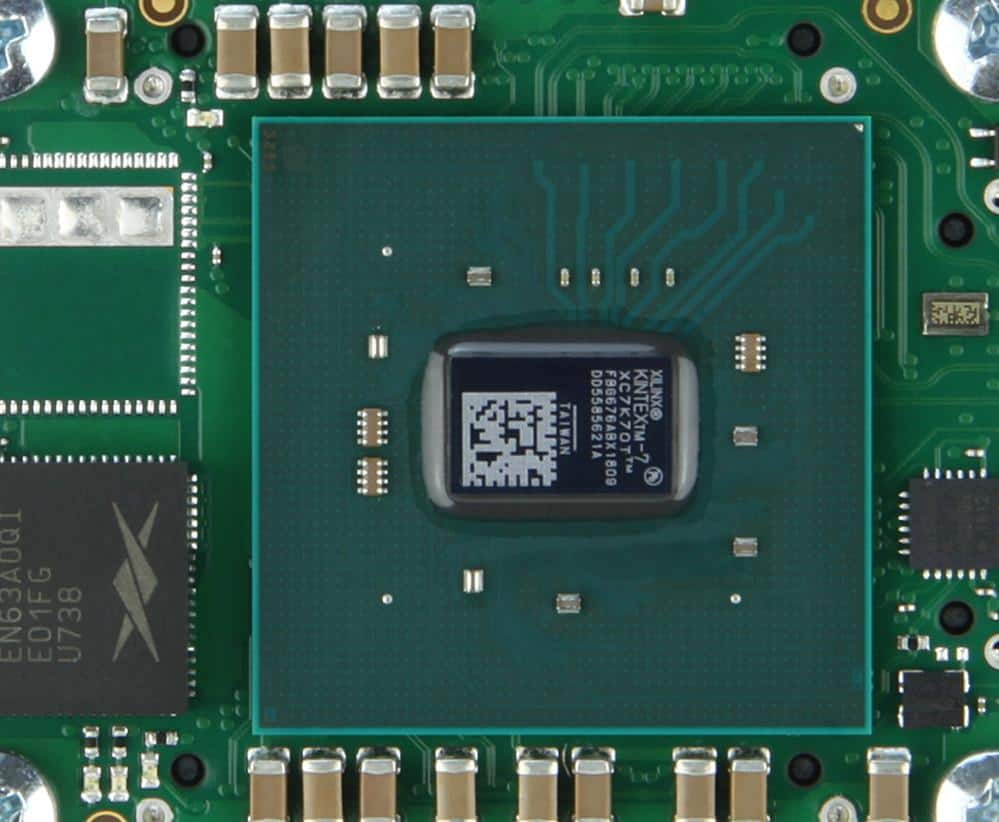 The Xilinx Kintex-7 FPGAs come in different speed grades, which includes -2L, -1L, -1, -2, and -3. The greatest performance of all is -3. Screening is usually done for devices working with the -2L speed grade for a reduced static power. Furthermore, in contrast to the -2 speed grade devices, they can function with cores of lower voltages to enjoy a reduced dynamic power.

In order to achieve the lowest possible current draw and make sure that the 3-starting of the I/Os are done at power-on, then the appropriate power-on sequence you should work with is VCCO, VCCAUX_IO, VCCAUX, VCCBRAM, and VCCINT.

Also, the appropriate power-off sequence involves reversing the sequence of the power-on sequence. Let’s say that both the VCCBRAM and VCCINT feature a similar level of voltage, then you can power both by that same supply, which is then ramped simultaneously.

Also, if VCCO, VCCAUX_IO, and VCCAUX possess the same levels of voltage then you can power them up using that same supply, which is also ramped simultaneously.

In addition, for the 3.3V VCCO voltages in HR Input/Output banks, the difference in voltage between VCCAUX and VCCO must not surpass 2.625V in order to maintain the reliability levels of the device.

Furthermore, for VMGTVCCAUX, no recommended sequencing exists. Also, you can ramp both the VCCINT and VMGTAVCC simultaneously. Furthermore, the power-off sequence that is recommended has to do with the power-on sequence’s reversal in order to get the minimum draw for the current.

If there’s failure in meeting the recommended sequences, then the current that is drawn or gotten from the VMGTAVTT could be more than the specifications during the power-down and powerup.

Also, when you power up VMGTAVTT before VMGTAVTT – VMGTAVCC and VMGTAVCC > 150 mV and also VMGTAVCC < 0.7V, then the current draw of the VMGTAVTT can rise by 460 mA for each transceiver during the ramping up of VMGTAVCC. The current draw duration can reach 0.3 x TMGTAVCC. For the power-down, the reverse holds true.

Moreover, When you power up VMGTAVTT before VMGTAVTT – VCCINT and VCCINT > 150 mV and also VCCINT < 0.7V, then the current draw of the VMGTAVTT can rise by 50 mA for each transceiver during the ramping up of VCCINT. The current draw duration can reach 0.3 x TVCCINT. For the power-down, the reverse holds true.

The values for the VIH and VIL are the appropriate input voltages. The values for the IOH and the IOL are ensured over the required conditions for operation at the VOH and VOL test points. However, note that testing is only for selected standards.

Also, the choice is to make sure that the standards reach their specifications. Furthermore, the testing of these standards must be at a minimum VCCO. Also, this is done with the respective VOH and VOL levels of voltage shown. You sample test other standards.

The specification of the switching characteristics is done on the basis of per-speed-grade. Also, you can design them as Production, Preliminary, or advance. Let’s explain each of these designations:

The release of these specifications happens immediately the characterization of the required production silicon of a specific family member is done to offer complete correlation between the devices and specifications over lots of production lots.

Regarding this specification, they work on full silicon characterization of the engineering sample. Furthermore, speed grades and devices having this designation have the intention to offer better indication of the silicon’s expected performance. Also, the chance that under-reporting delays happen is well reduced in contrast to the final product specification, known as Advance data.

The Advance Product Specification works with only simulations and usually they are available after the freezing of the specifications of the device design. Although the speed grades coupled with the designation are seen as conservative and relatively stable, it is possible for some under-reporting to happen.

The derivation of the parameters for internal timing is from the measurement of the internal test patterns. Furthermore, all the AC switching characteristics usually represent worst-case voltage supply and conditions of junction temperature.

Since the production of individual members of the family occurs at different times, migrating through different categories entirely depends on the fabrication status for every device.

Picking the Right Voltage and Speed Grade in the Vivado Tools

When selecting a device, it is very necessary that you choose the right device voltage and speed grade while using the Vivado tools.

What are the Kintex-7 FPGAs Devices?

The following are the Kintex-7 FPGAs Devices

Benefits of the Xilinx Kintex-7 FPGAs

Best Price-Performance of the Industry

After the introduction of the first 28nm FPGAs, designers have the widest possible range of platforms that are programmable, which includes the new devices’ versatility. When you double the price performance, and then reduce the cost and power consumption in half, this ensures that the Xilinx Kintex™-7 FPGAs stand out as the best option for the quick-growth applications of today like wireless communications.

With these great features, designers will be able to make use of these devices with exceptional connectivity and performance, at a price point that was initially limited to just applications with the highest-volume.

With the Xilinx Kintex-7 FPGAs, designers will be able to build in a much better bandwidth and a 12-bit analog that is digitally programmable, coupled with meeting power and cost requirements.

The highly affordable and efficient devices also make it possible for the designers to check throughput and connectivity requirements while reducing the part counts. Also, the 1,833Mbps, 72-bit memory interface of the Kintex-7 supports a single memory for the buffer designs rather than use two or four buffer designs that are usually required by other devices.

Importantly, one single Kintex-7 device has the ability to handle rates, which allows the implementation of a single chip over IP gateway, which can back 12 channels using 3G over an Ethernet bridge with 10 Gigabit and 4-channels.

All the seven series FPGA families usually leverage the unified architecture. This is just to offer some protection for IP investments thereby making migration of six series designs much easier. Using common elements such as Block RAM, logic fabric, clocking, DSP,  AMS, etc, also the unified architecture helps in facilitating quick retargeting within these 7 series. Also, for new projects and migrations, the architecture of the Kintex-7 helps in reducing the development times dramatically. This also assists designers to put their attention on the product differentiation.

Xilinx Targeted Platforms for design are the best development kits for the industry, which are complete with tools, boards, reference designs, IP cores and FMC support. With these kits, designers can immediately start the development of the application. It also boosts productivity while speeding up the advanced functionality access with reference designs that are pre-verified.

Furthermore, in combination with an evaluation board with full features and the Design Suite software, this facilitates the incorporation of solutions from ecosystems of available add-on third-party IP and hardware.

In addition, the Xilinx Kintex base kit (KC705 Evaluation Kit), offers a framework that is flexible for the design of systems with higher-level, which require PCI Express, Gigabit Ethernet, DDR3, as well as other serial connectivity. Also, the Kintex-7 FPGA DSP Kit, which is the 1st domain kit, features a high-speed, integrated analog FMC, which helps in interfacing to the real-world signals.

The Xilinx Kintex-7 FPGAs provide the most appropriate price-performance. This helps designers in meeting strict latency requirements for the processing of LTE baseband in common platforms.

We hope we have been able to explain to you what the Xilinx Kintex-7 FPGAs offer. Furthermore, they have great features and their significance in the technology world cannot be overemphasized. Also, if you still have some points you need some clarification on, please send us a message. We will respond to it as fast as we can.