The Xilinx Spartan-II FPGA Family offers users lots of logic resources, high performance, and rich features at a very low price. It is a six-member family offering densities with system gates between 15,000 – 200,000. The system performance has a support up to about 200 MHz.  Its major features include a block RAM of 56K bits, RAM distributed to 75,264 bits, four DLLs, and 16 I/O standards. It has predictable and fast interconnects, which means that design iterations that are successive keeps meeting timing requirements.

Also, the Xilinx Spartan-II FPGA Family is a much better option to ASICs. The FPGA prevents the long development cycles, initial cost and the inherent risk involved with conventional ASICs.

Furthermore, the programmability of FPGA allows for upgrades to the design in fields not requiring the replacement of hardware. This is not possible with ASICs.

The 2nd generation replacement technology for ASIC has the following features

The System Level has the following features 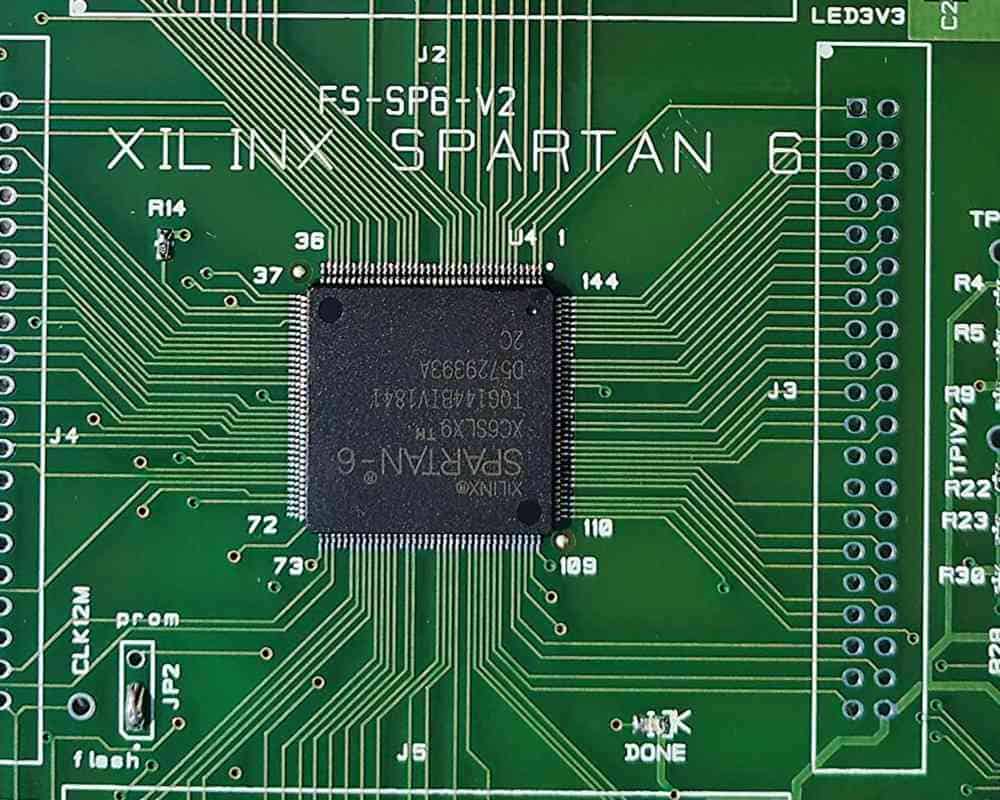 The powering of the main logic is at 2.5V,

Also, there are two block RAM columns lying on the die’s opposite sides. These opposite sides are found between the IOB columns and the CLBs. A strong hierarchy of routing channels interconnects these elements.

It is possible to customize the Xilinx Spartan-II FPGA Family. You do this by loading the configuration data in the static internal memory cells. Also, it is possible to achieve countless reprogramming cycles using this approach.

Furthermore, these cells stored values help in determining login interconnections and functions, which the FPGA implements. You can read the configuration data from the serial PROM. Furthermore, you can also write in the FPGA in boundary scan, slave parallel or slave serial modes.

The Xilinx Spartan-II FPGA Family are useful in applications requiring high volume whereby a quick programmable solution’s versatility adds benefits. Furthermore, this family is best for reducing the development cycles of products coupled with providing a solution that is cost-effective for all high-volume productions.

In addition, the Xilinx Spartan-II FPGA Family achieves low-cost, high-performance operation. This is possible through its advanced semiconductor technology and architecture. Also, with Xilinx Spartan-II devices, you can get system clock rates of about 200 MHz. Asides from the conventional benefits that this programmable high-volume logic solutions offers, the Xilinx Spartan-II FPGA Family provides synchronous on-chip dual-port and single-port RAM (both in distributed and block). Other features include drivers for DLL clock, programmable reset and set on the flip-flops, quick carry logic, etc.

The Functional Description of the XILINX Spartan-II FPGA Family

The FPGA is Spartan-II refers to a field-programmable gate. The Spartan-II FPGA array features five configurable elements which are:

The CLBs create the central logic structure having access to all routing structures. The memory and logic elements are around the IOBs. Also, this helps to route signals easily on and off the chip. Values in the static memory cells are in charge of the interconnect sources and logic elements. These values can reload to alter the function of the device.

Also, there are pull-down and pull-up resistors that can be independently attached to each pad. A weak-keeper circuit can be also attached to each pad. All outputs that don’t partake in configuration will forcefully remain in a high-impedance state. The weak-keeper circuits and pull-down resistors remain inactive. However, inputs may pull up optionally.

Also, it is important to protect pads against any damage from electrostatic discharge. Also, protecting pas from over-voltage transients is crucial. There are two types of over-voltage protection. These are the 5v compliance and no 5V compliance. The 5V compliance permits a structure connected to the ground to turn on when output increases up to 6.5V. In some cases, 5V compliance isn’t necessary.

You can configure each input buffer to comply with the low-voltage signaling standards. The input buffer uses a threshold voltage (VREF) in some of these standards. The demand for VREF restricts using standards in proximity to each other.  After configuration, there are optional pull-down and pull-up resistors at every input.

Every output driver can be independently programmed for various low-voltage signaling standards. Also, the externally supplied Vcco voltage determines the output high voltage. The demand for Vcco restricts the use of standards in proximity to each other.

Some I/O standards need Vcco or VREF voltages. These voltages connect externally to device pins. Furthermore, there are restrictions on the type of I/O standards to combine in a specific bank. There are eight I/O banks due to the separation of each edge of the FPGA in two banks. Every bank features several Vcco pins which must connect to the same voltage. The output standards will determine the voltage.

A combination of output standards can occur within a bank. This happens if they utilize a similar Vcco. All VREF pins must connect o the external voltage source. Also, in a bank, inputs demanding VREF can combine with those that don’t. However, just one VREF voltage is ideal for use within a bank.

You can configure these elements as level-sensitive latches or edge-triggered D-type flip flops. The function generators within the slice can drive the D inputs.  Also, each slice features synchronous reset and set signals.

Furthermore, the Synchronous set forceful allows a storage element into the specified initialization state for it. The F6 multiplexer selects one of the F5-multiplexer outputs. It then uses this to combine the outputs of the CLB’s four function generators. This allows the use of any 6-input function.

Carry logic can carry out high-speed arithmetic functions. The FPGA CLB provides support for two distinct carry chains. The carry chains have a height of two bits per CLB. Also, the arithmetic logic features an XOR gate. This enables the implementation of 1-bit full adder within an LC. Furthermore, an AND fate enhances the functionality of multiplier implementation. The carry path can cascade function generators for using wide logic functions.

The LUT in Spartan-II FPGA can offer a 16-bit shift register. This can help to capture burst-mode or high-speed data. Also, you can use this mode to save up data in applications like Digital Signal Processing.

There are multiple large block RAMs incorporated by Spartan-II FPGAs. This helps to complement the RAM LUTs that offer shallow memory structures in CLBs. Block RAM memories are in columns. Spartan-II devices feature two columns. Each of the columns is along each vertical edge. These columns help to expand the chip’s full height. A Spartan-II device with a height of eight CLBs will feature two memory blocks for each column.

This delay path restricts the speed of any worst-case design. The routing architecture and the place and route software were defined in a single process. This process reduces long-path delays and provides the best system performance. Also, it reduces compilation times since the architecture is user-friendly.

A general routing matrix (GRM) is adjacent to every CLB. Vertical and horizontal resources connect through the GRM. Also, the GRM serves as the means through which the CLB accesses the general purpose routing.

GRM signals are well routed by 96 buffered Hex lines to other Grams six blocks. Hex lines are in a staggered pattern. Also, you can only access Hex lines at the midpoint or endpoint.
About 33 % of hex lines are bidirectional while the rest are without direction.

All output buffers that fall within a specific VCCO bank has to share a similar voltage for the output drive source. The input buffers for the PCI 66_3, LVCMOS2, LVTTL, and PCI33_3, makes use of the VCCO voltage.

The low-voltage Input/Output standards having a differential input buffer usually need an input VREF (reference voltage). The VREF is provided as the device’s external signal.

This reference voltage signal is within the device such that all the packages in there are about eight internal VREF banks. In each of the VREF banks about one out of every six Input/Output pins is configured automatically as an input for the reference voltage.

Within each of the VREF banks, all input buffers requiring a VREF signal has to be the same or similar type. You can place output and input buffers of all types without the need of a reference voltage.

Effects of the Transmission Line

An electrical signal’s delay along a specific wire is being dominated by the fall and rise times when the distance covered by the signal is a short one. Delays of the transmission line vary with capacitance and inductance. However, with boards that are well-designed you can see delays of about 180 ps for every inch.

As the speed of the system keeps increasing, the effect from the Input/Output delays could transform into a limiting factor. Therefore, the termination of the transmission line becomes more significant.

Different termination techniques help in reducing the impact of the effects of the transmission line. The techniques below are for output termination.

The below are the techniques for input termination.

Note that you can apply any of the termination techniques in your preferred combination.

It is possible for ground bounce to happen with digital Integrated circuits working with high speed, when there is a change in the state of multiple outputs simultaneously, thereby leading to the internal logic or output having an unwanted transient behavior. You can also refer to this problem as the SSO – Simultaneous Switching Output problem.

The major cause of ground bounce is as a result of the present changes in the accumulated inductance of ground metallization, bond wires, and ground pins. There is a deviation in the internal ground level of the integrated circuit from the ground level of the external system. This happens just for a short time (a few nano secs) after a simultaneous change in the state of multiple outputs.

Ground bounce has an effect on any input and stable outputs. This is because it gives interpretations of the incoming signal. It achieves this by drawing some comparison between it and the internal ground. Also, if the amplitude of the ground bounce surpasses the actual noise margin (instantaneous), then you can interpret a non-changing input as a pulse having a polarity that is opposite to the ground’s bounce.

The Xilinx Spartan-II FPGA Family devices include the following.

By now, you should have gained vast knowledge as regards the Xilinx Spartan-II FPGA Family. They come with great features and involve about 100 family devices. However, if after going through you have some questions on your mind, you are free to ask us here. We are always here to help you.