The use of high power electronic devices is increasing day by day. There are countless electronic devices that contains high power electronic circuits, like Power supplies, power amplifiers, inverters, chargers, DC – DC converter, SMPS and many more. These devices are extensively used in various applications like military, aerospace, defense, satellite and ground segment control equipment and many other similar applications. Ultimately the demand of high power PCBs is getting higher. These PCBs conduct heavy current and hence dissipate more heat.

Why Heavy Copper Circuit is needed

The high power electronic circuits carry higher current. This current when continuously flown in the PCB tracks can damage the tracks in longer run. This is because of the low quality or poorly designed PCB without any consideration of power devices and heavy current flow. However this is mostly not the case, the actual case is when the designer use double copper layers of 3-4 oz/sq ft and “thinking” that this will allow the PCB traces / circuit to carry higher currents. This hypothetical considerations and not actually calculating the capacity of PCB traces and layers to carry current will eventually result in PCB damage due to higher losses. This is because in multiple copper layers technique one layer may carry more load current and other carries smaller load current. Hence this uneven distribution of current flow ultimately gets PCB hot and result damage. However on the other hand the implementation of “Heavy Copper” technique is widely acceptable because designer can have more reliability on the heavy copper PCB structure and construction.

The designer can estimate the amount of current using standard IPC formula that is mentioned below in this article. The heavy copper PCBs allow high current to safely conduct and increase mechanical strength of board and improve thermal performance of PCB. The thickness of copper of the heavy copper PCB is around 4-20 oz/ sq ft. For extreme copper PCBs the copper thickness can start from 20 and can be as high as 200 oz/ sq ft. However the ordinary PCB for high current has 0.5 to 3 oz/ sq ft of copper. 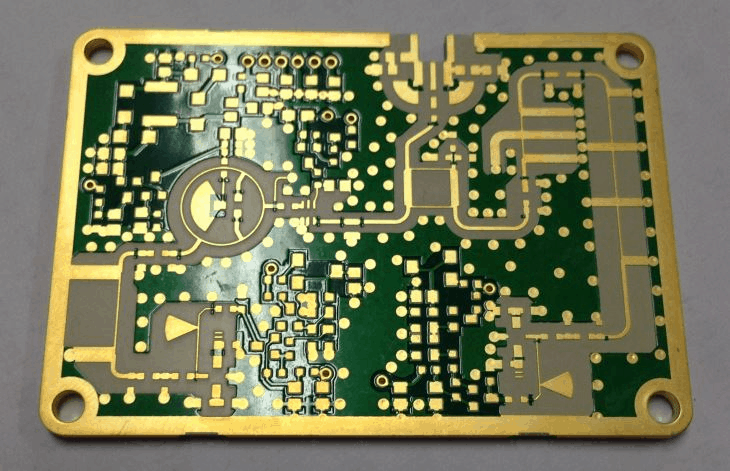 Normally the copper is “etched away” on the ordinary high current PCBs by means of photo sensitive film called photo resist. The photo resist film and laminate panel are lined up and aligned and then pins are used to secure their positions. Then a UV light blasts to harden photo resist and then it is removed and copper underneath is etched away. While the black ink on the film shows the blueprints/circuits of tracks, pads, vias and holes that are prevented from UV and copper underneath is not etched away and remains to make copper traces. The holes and vias are then electroplated with copper to form balanced and smooth sidewalls of vias and Through Holes (TH).

On the other hand, the heavy copper PCBs process uses speed pattern plating and differential etching. In ordinary type of copper etching the sidewalls are not smooth and vias and undercuts are not good in wedges and capture pads, so the novel technique is being implemented where in a very thin layer of copper is chemically deposited on the copper clad laminate (CCL) first. This process is called “Electroless” copper deposition. After this the thicker layer of copper is plated through the process called “Electroplating“. The thickness of the copper on layers and in the vias like Blind Micro Vias (BMVs) is dependent on the throwing power of “Electroless” copper bath. After this speed plating process the copper stack (CCL, Electroless and Electroplated) is “differentially etched” to remove unwanted copper. The differential etching process is the same as the ordinary method including dry film lamination, exposure to UV, film development and then differential etching. It is called differential because it removes multiple layers (3 layers) of copper as described in the figure below.

This advance method as resulted in enhanced and smooth copper thickness on BMVs sidewalls and easy undercuts. 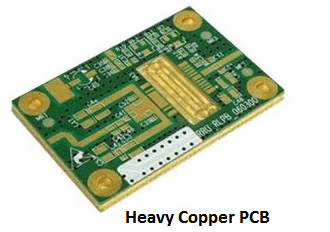 The one most exciting benefit of heavy copper PCB is the ability to accommodate both low power electronics and high power electronics on the same layer of same PCB. Usually we know that in an end product the low power PCB is kept on one PCB and high power electronics is placed on totally different PCB and they are interfaced with each other using thick copper jumper wires. After the advent of heavy copper PCB fabrication, the low power electronics for example MOSFET gate driver circuits and micro-controllers and ADC are all kept on same PCB containing high power components like MOSFETs, IGBTs and power diodes. This resulted in the lesser overall size of end product and compact and powerful electronic products emerge. The large and bulky heat sinks are no more needed and heat-sinks now can be printed on PCB using heavy copper construction discussed above. Similarly bulky transformers are eliminated and transformer primary and secondary are printed on PCB planes and same dielectric materials is used between all layers. The secondary windings are sandwiched between primary windings inside the PCB thus reducing leakage inductance.

The copper trace in the final finished heavy copper PCB carries current. This current will dissipate heat according to the formula of power loss. . Means the more the resistance of trace the higher the losses. Hence if the trace is wider and thicker it will dissipate less heat. The trace will ultimately cools down by dissipating its heat generated to surrounding components by means of “Heat Conduction” and the remaining heat is dissipated in air by “Heat Convection”. There are numerous ways to dissipate heat generated to air. The implementation of heat sinks, cooling fans, blind vias and PTH to conduct heat to thermal pads and then Thermal Interface Material (TIM) can easily flow heat in heat sink fins to dissipate in air. A well designed PCB keeping thermal management into consideration will strongly ensure the reliability of PCB and ultimately increase the end product life time.

As per the IPC-2221A standard, the current carried by an external track can be given by a simple equation mentioned below.

The mechanical cracks and failure are commonly seen in ordinary FR-4 based PCBs designed for high current. This is because of the difference of CTE (Coefficient of Thermal Expansion) of substrate material and copper. However exotic materials can be used to minimize this difference but are expensive. The high thermal stresses will increase the resistance of the trace hence chances of breakdown are high. In order to check the circuit/PCB trace for its thermal stability a test is performed called “Thermal Cycle Test” in which the PCB is exposed to numerous cycles of heat/Thermal exposure under 25OC to 260OC. The TCT will check for the increase in resistance of the trace/circuit upon various thermal cycles and records the results. If the resistance increase is less than 20% it is not considered failure but the resistance increase more than 20% is considered failure. TCT performed on average SMT PCB Assembly, shows that it can survive up-to six thermal cycles including thermal cycles of fabrication steps, assembly steps and if the PCB gets faulty and being repaired by hot air gun and similar. TCT performed on heavy copper PCBs shows excellent results dramatically reducing the chances of breakdown to 0 even after total of eight thermal cycles.

4- Overall size of product is reduced by incorporating high and low power electronics on same PCB.

6- Heat-sinks directly plated on the surface of board with up to 120-oz copper.

7- High-power-density planar transformers are printed on board